For unstable ankles, combining different exercises is most effective 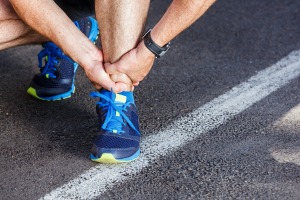 Ankle sprains have recently been identified as the most common type of injury below the waist and most frequently occur in children and adolescents. In some cases, ankle sprains can lead to a condition called functional ankle instability (FAI), in which an individual feels as if their ankle is "giving way" and has difficulty performing certain actions. FAI is caused by weakened muscles and a lack of proprioception, which is the ability to sense the positioning of one's body parts and make appropriate movements based on this information. For these reasons, treatment for FAI may consist of exercises aimed at increasing strength and improving proprioception. Though these types of exercises are often prescribed, there is not much evidence on whether combining them leads to any added benefit, and for this reason a powerful study known as a randomized-controlled trial (RCT) was conducted.

Thirty patients in their 20s with FAI were selected to participate in this RCT. Patients were randomly divided into one of three groups: control group (group A), which did not engage in any exercises, muscle strengthening group (group B) or combined muscle strengthening and proprioceptive exercise group (group C). Group B was instructed to perform a series of different strengthening exercises using an elastic band. Group C executed the same exercises as group B, but also performed four sets of exercises using various devices to improve proprioception. Both exercise groups completed three 10-minute sessions per week for four weeks.

At the completion of the RCT, patients in groups B and C improved significantly, while group A did not experience any improvements. When compared to one another, group C was found to experience even greater improvements than group B, with increased muscle strength and reduced severity of FAI. More research should be conducted on a larger scale to confirm this, but these outcomes support the combination of strengthening exercises with proprioceptive exercises as an effective intervention for patients with FAI. By utilizing both treatments, physical therapists can help patients cope with their condition and more quickly return to a normal life.