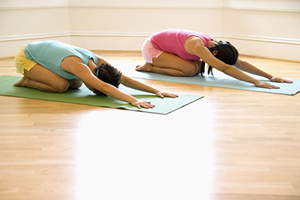 Myofascial pain syndrome (MPS) is a common and chronic (long-lasting) pain disorder. It occurs when pressure on sensitive spots in the muscles—which are called trigger points—causes pain in different areas of the body. MPS can occur for many reasons and may be aggravated by performing certain motions on a repetitive basis or develop for unknown reasons, and it usually tends to get worse over time. There are several treatments commonly used to manage patients with the condition, and many are offered in the course of physical therapy. Some of these include massage, ultrasound, heat therapy, stretching exercises and strengthening exercises, but unfortunately, it's not clear how effective many of these treatments are. This is due to the fact that there are only a limited number of studies on the topic, and these few studies suffer from certain flaws, which reduces the validity of their findings. For this reason, a powerful study called a systematic review was conducted to answer the following question: does exercise reduce the intensity of pain and disability in individuals with MPS.

Eight studies are evaluated in the review

To conduct the review, investigators searched through six major medical databases for studies that evaluated the use of exercise compared to other treatments or no treatment
for MPS. Only high-quality studies called randomized-controlled trials (RCTs) and quasi-RCTs—which are similar but considered lower quality—were accepted in the review. This search process led to a total of eight RCTs, which included information on 255 participants ranging in age from 21-56, being used for the review. The quality of each of these studies was then evaluated and their findings were compared to one another. The goal of this process was to identify a common trend and establish a clearer understanding of the role of exercise in treating MPS.

Despite some shortcomings, researchers recommend exercise combination for MPS

Overall, the studies supported exercise as a beneficial treatment for MPS, but their low quality needs to be taken into consideration. The exercise was found to significantly reduce the intensity of pain in the short term when compared with minimal or no intervention, but the evidence to support this was not of the highest quality. Despite this, the researchers still believe that exercise is an effective treatment for MPS and recommend that medical professionals consider it. This is primarily due to the fact that exercise is low cost, safe—no studies reported any harmful effects—and associated with countless other benefits in the general population. Based on the findings of this review, they particularly recommend combining strengthening exercises with stretching exercises in order to achieve the most significant improvements in patients. With this in mind, future studies should continue to evaluate this topic and specifically focus on treatments that include both stretching and strengthening exercises for MPS. In the meantime, patients with MPS and other painful conditions should still consider exercising a safe and effective way to address their pain and improve their overall health.